The Non-Federal Fed Up To Its Usual Tricks – Meanwhile, Bitcoin Grows & Grows

The Fed up to its usual tricks while as in tales of old, the one who should and shall be king grows stronger by the day to usurp its throne.

The Fed has, through 2019, been pumping cash into the economy at a staggering rate. In October last year, the Fed increased the number of dollars in circulation by $162 billion in one round of money creation, as BeInCrypto has previously reported. However, the Fed still maintains that this is not quantitative easing and that it is only temporarily creating this money in an attempt to bail out financial institutions. The major issue, as pointed out by Founder of QuantumEconomics.io, Mati Greenspan, (@MatiGreenspan) is that with liquidity freely flowing into the market from the Fed, it will be difficult to stop the flow without causing major repercussions to the stock market.

The Fed’s recent intervention in the repo markets is the biggest in history!! Now that they are again flowing liquidity freely into the market, it’s gonna be hard to shut the tap again without major repercussions in the stock market. 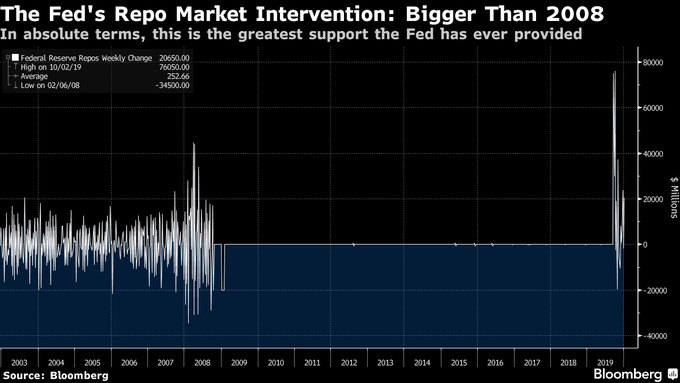